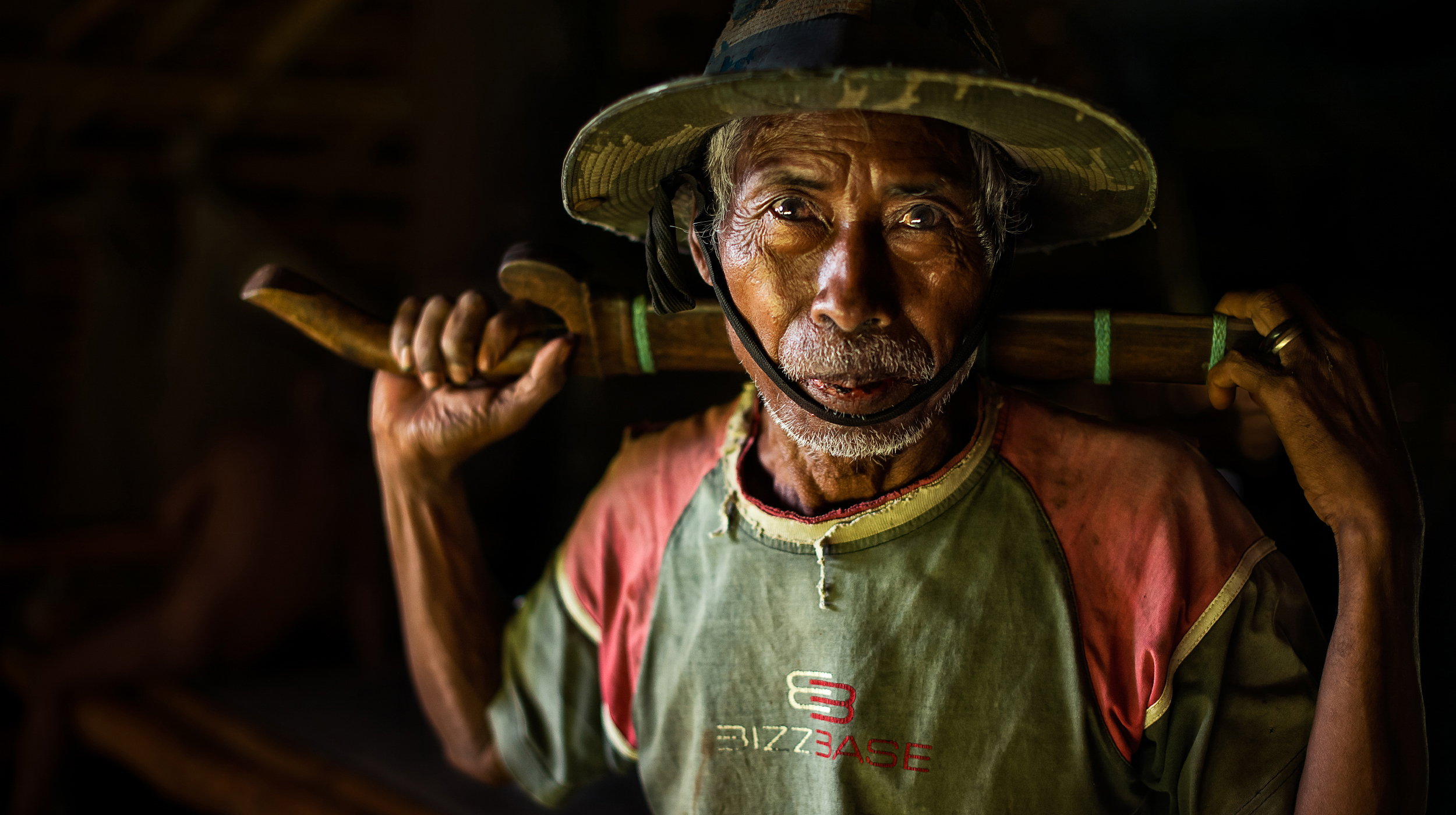 I have been asked many times how do I take my travel photographs and how much post processing is involved.

To put is simple, all of my photographs undergo some basic sharpness/saturation/contrast corrections, plus more consistent editing depending on the subject or the message I want to emphasize. If you’re shooting raw, as I do, there’s no way around it.

But the real question should be: is there any amount of post-processing that can rescue a badly composed frame, shot in a bad light? It depends. If you are a master of Photoshop there’s a good chance you’ll eventually get a decent pic, but shooting it right from the start will get you faster and more consistent results.

Below is an example of one of my favourite pictures I took in Wainyapu, during my 2014 trip to Sumba. I was staying in the hut of Thomas, the village chief, when his father came to visit the family from nearby. I immediately thought he was a great subject; the hat, the traditional Sumbanese knife and the red-stained teeth called for a fantastic picture. 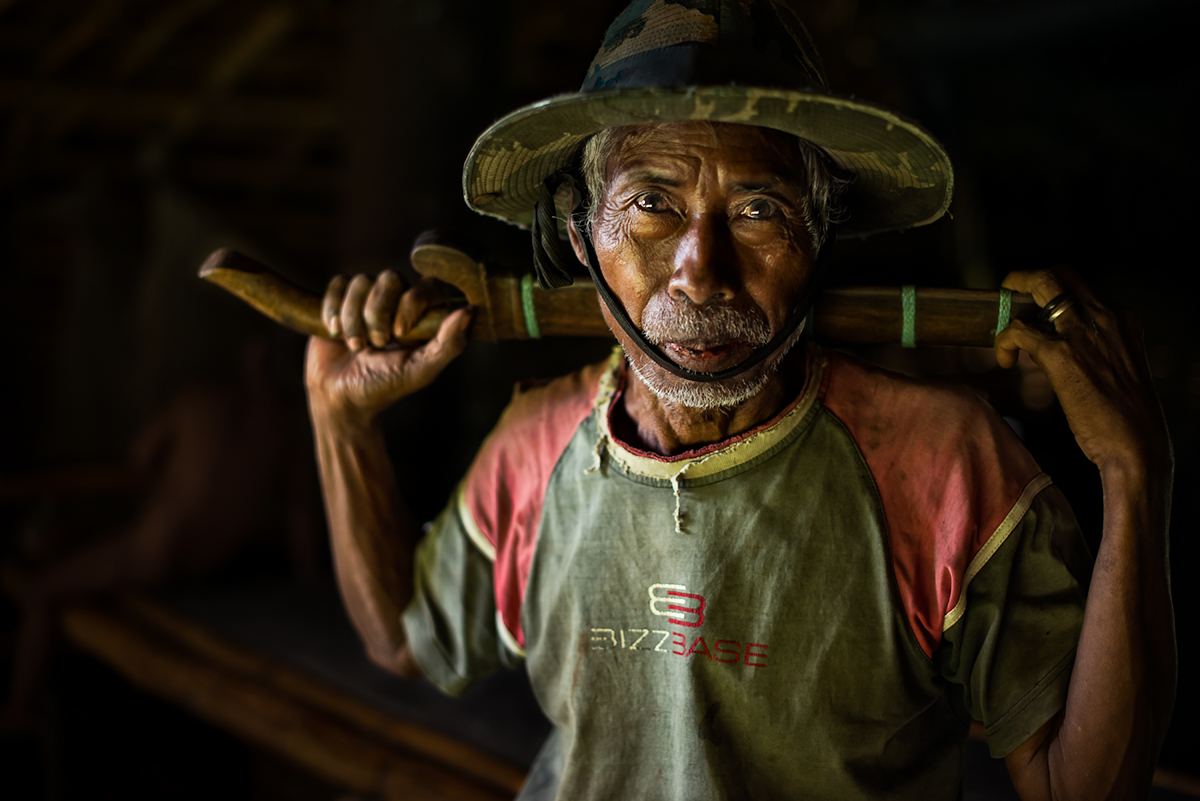 The main problem were:

So here is how approached the subject.

The first thing was to politely ask the guy if it was OK to take a few pictures. People usually don’t mind and we were guests, so things went really smooth here.

The second thing I did was to unwrap my softbox and connect it to my off-camera flash. The softbox is a not-so-bulky piece of equipment that every travel photographer should have in his bag. Yeah, at the beginning it takes that little extra space in your backpack that you would love to fill with something else, and, honestly, it is intimidating (both for me and the subjects) to unfold it. But I have been carrying it for several years now and I find myself using off-camera lights more and more regularly; the fact that I have a crush for dark, indoor scenes doesn’t help either…

If a total stranger agrees for a photograph, it doesn’t mean he’ll stand for an hour waiting for the perfect shot as a paid model, so things have to unfold relatively quick. Below is a series of compositions I did before getting it right; the whole process, from the test shots to the final one, didn’t take more than 5 minutes.

I started right away with the off-camera flash on, there wasn’t simply enough light to get the details of the elder unless of really pushing the ISO. The idea is to isolate the subject, but retain some details in the background to give a contest. I set the flash in TTL mode -1EV. In (1) the composition is off, eyes are drawn away, so I asked the subject to move right (f2, 1/125, ISO800). In (2) the composition is getting better, but there’s too much light. Also, the the flash is too much perpendicular to the subject and the contrast is a bit dull. 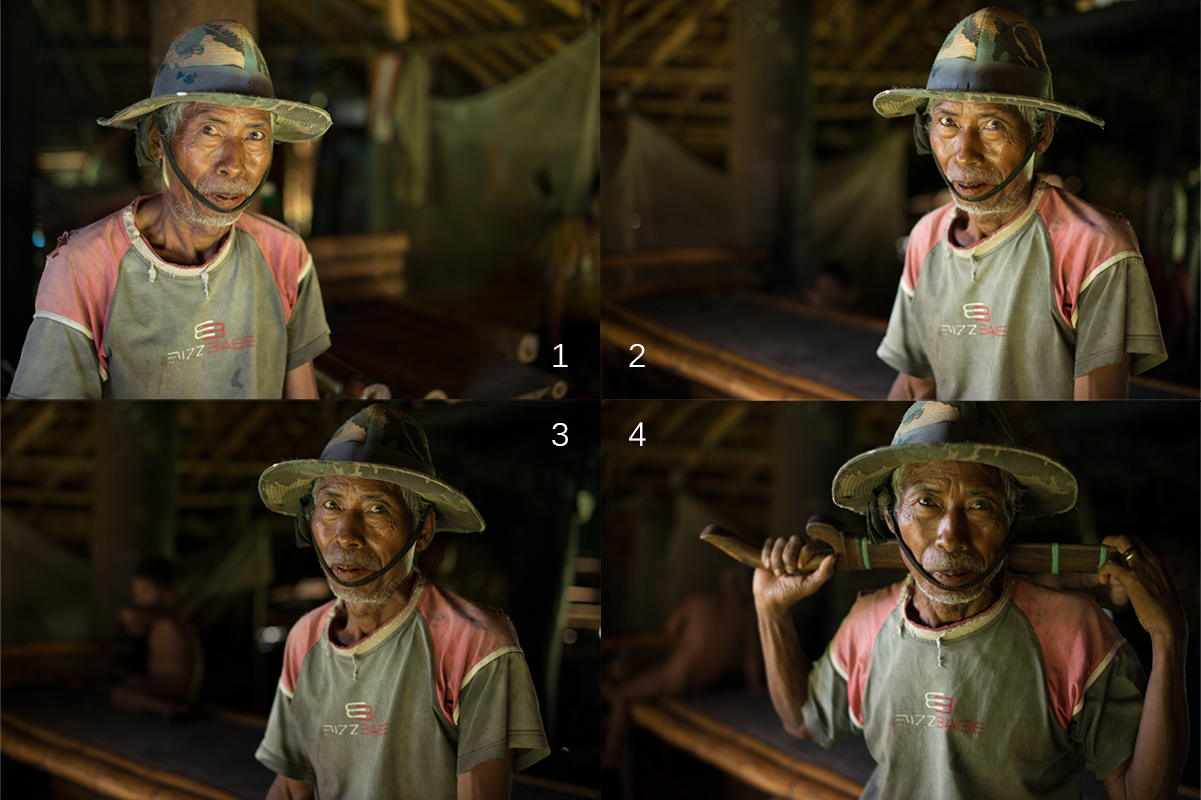 I then adjusted aperture and shutter speed and the subject is now well isolated from the background (3), but the light is still dull. It’s an ok shot, but everything is a bit “meh”. I moved the light a bit closer, 45° between camera and subject, and asked the elder to hold his Parang (knife) for a nicer composition that’s now filling the frame (4). For this shot I was at f2, 1/320, ISO800; there’s much more depth and contrast on the subject and the background is nicely blurred.

That’s all for the shot. What about post processing? Below is the before and after. 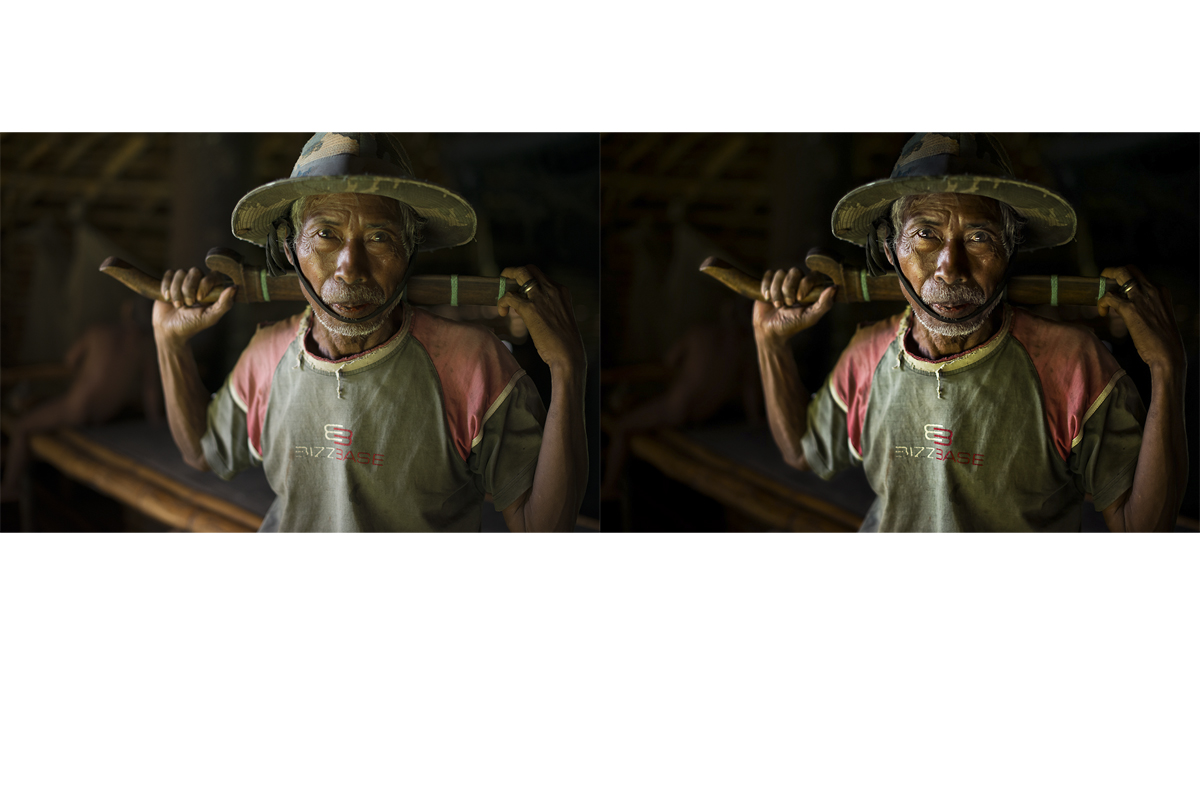 The first thing I realized when I opened the picture on my screen is that the background was still too bright and cluttered. I then selectively brought brightness down, without touching the main subject; some might argue the background is too dark now, but that’s my style and the mood I like in my pictures.

One of the main issues were the hairs of the elder; the light from the flash, which I gelled to match the colour of the bamboo-walls, bounced on his hat and t-shirt giving the hairs and unnatural green cast. I then desaturated the hairs to restore their original colour.

The rest is a simple sharpness, contrast and colour adjustment to add some drama to the shot. The whole post-processing didn’t take me more than 10-15 minutes.

To conclude. Even the shot in (1) would have been a decent one; but with some little extra effort in finding the good composition and the right light I believe I achieved a nicer photograph and saved lots of post-processing time.

Hope this helped and answered some questions!