Busyadores: the nest gatherers of Palawan 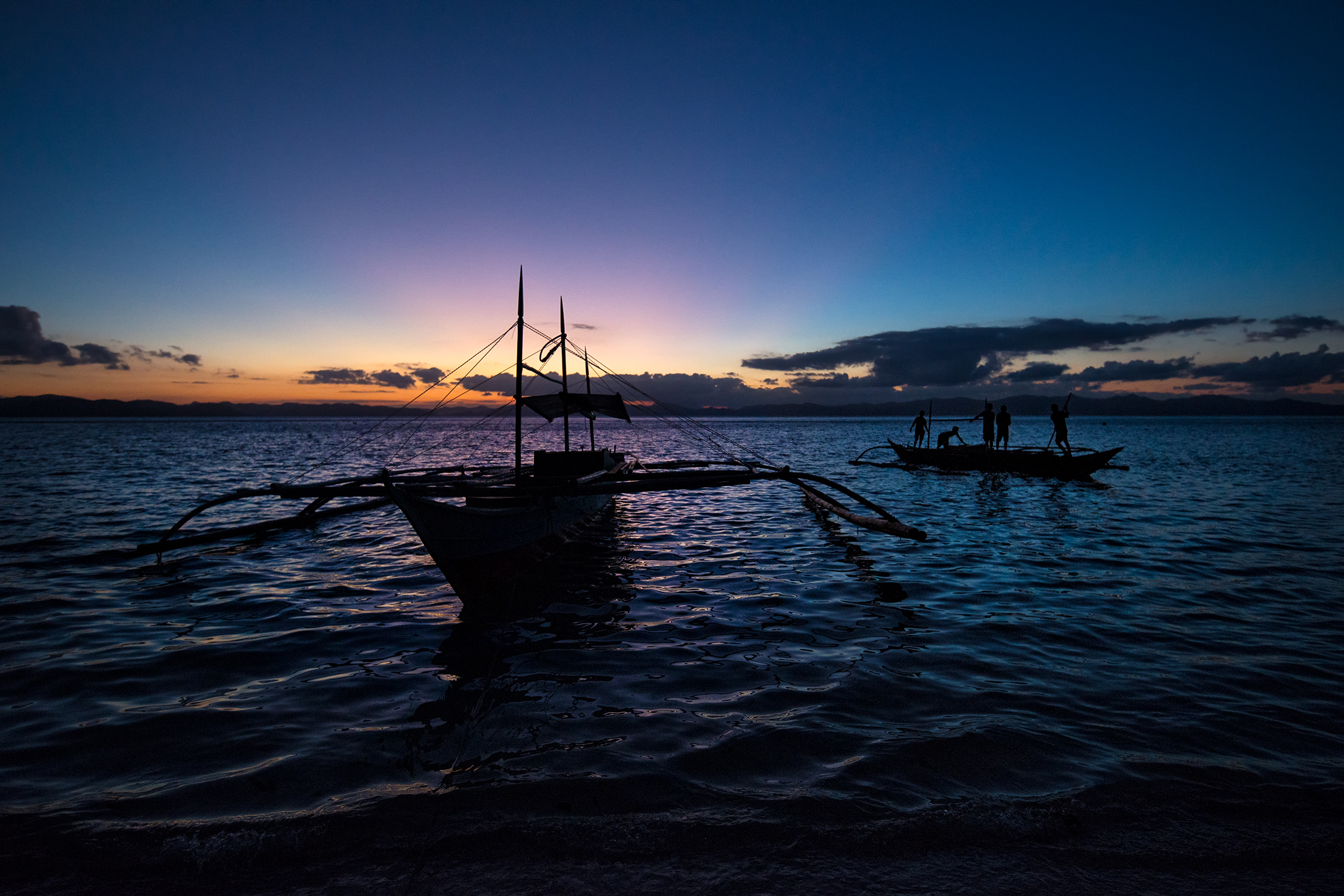 We were on a boat heading East to Pabellon Island. I had met Omi the day before, after a long struggle to get permission to set my foot on this remote archipelago. Omi, the holder of the bird’s nest concession, had granted me a ride but he was not to join until the very end of the harvest. The men around me were leaving for the first trip of the season and I did not really know what to expect from the three days and nights I was about to spend on this cut-off island in the Sulu Sea. Needless to say, I did not speak a word of Filipino, but I was lucky to be with Alfred, a friend I had met a couple of days before at the local market who was willing to be my translator for the coming days. I was up and ready to follow these workers on their daily quest for nests.

I must confess the first time I heard of edible nests I thought it was a hoax. Is somebody seriously willing to pay for a bowl of soup made from hardened strands of bird saliva? Yet, Rosmal was not up for jokes. He was a serious man living in a small village in the North-East of Borneo, father of five and a hard worker. He was about to spend a whole season away from his family to collect nests in the most inaccessible of places: on the roofs and sharp walls of the intricate Gomantong cave system.

It seemed so extraordinary that I was totally hooked by the story.

The idea was to be back in a year and a half during the harvest season, but the more I was making plans the more I was stumbling into closed doors. Nest collection is a heavily regulated business and getting a permit to Gomantong cave was proving to be a hard and costly task. After yet another disappointing call to the local government office, I had eventually given up and started looking into alternative locations. It did not take long before setting my eyes on the Northern tip of Palawan, Philippines.

The engine-propelled Bangka, an overgrown canoe outfitted with two bamboo outriggers for increased stability, had just left the pier of Taytay, a sleepy town on the Northeastern tip of Palawan. During the 1-hour long trip that led us to the Pabellon Island, Alfred was doing his best to translate the common set of questions about my age, number of children and marital status. On my part, I was trying to get a first glimpse into the life of these hard-looking men, thought it was difficult to get over the embarrassment you might expect from people who just met for the first time. Things would have certainly started to smooth over by the end of the day. 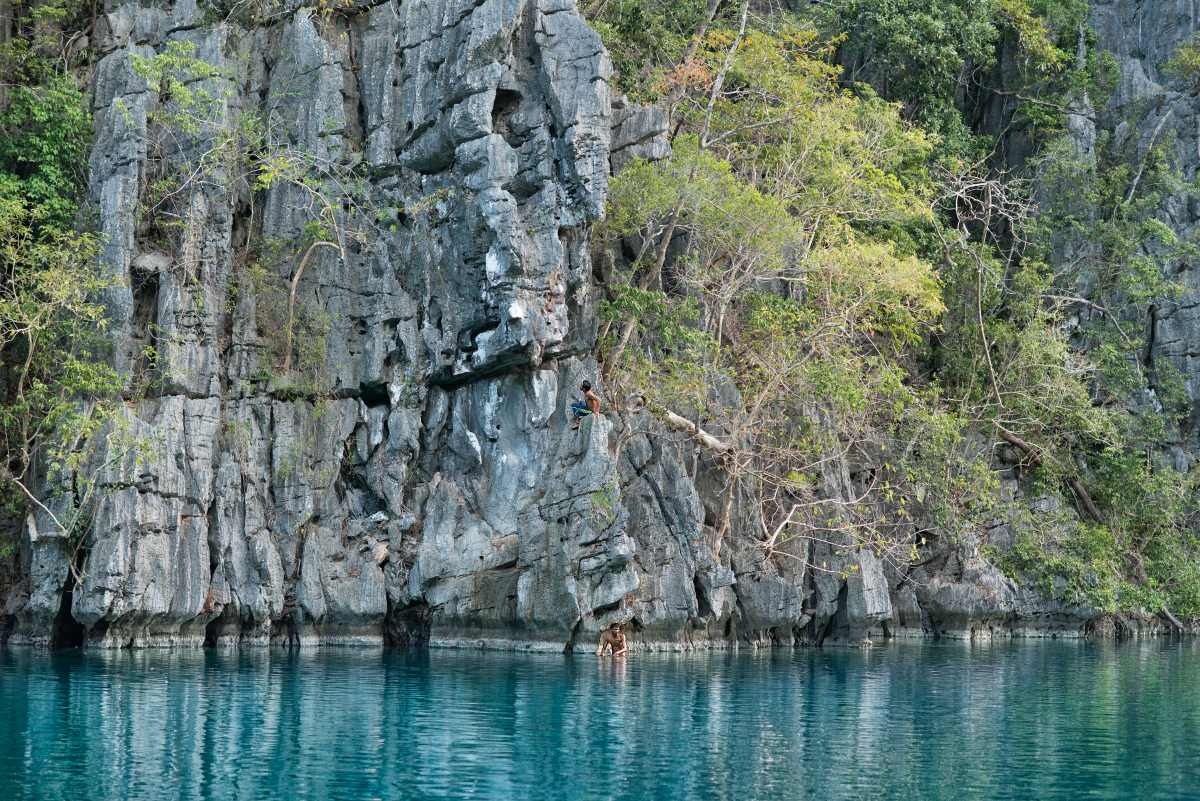 What a sight this island was. A pristine stretch of sand lapped up by the azure waters, surrounded by a dramatic limestone cliff. A few shacks were scattered around, providing food and shelter to a dozen of fearless workers locally known as busyadores. 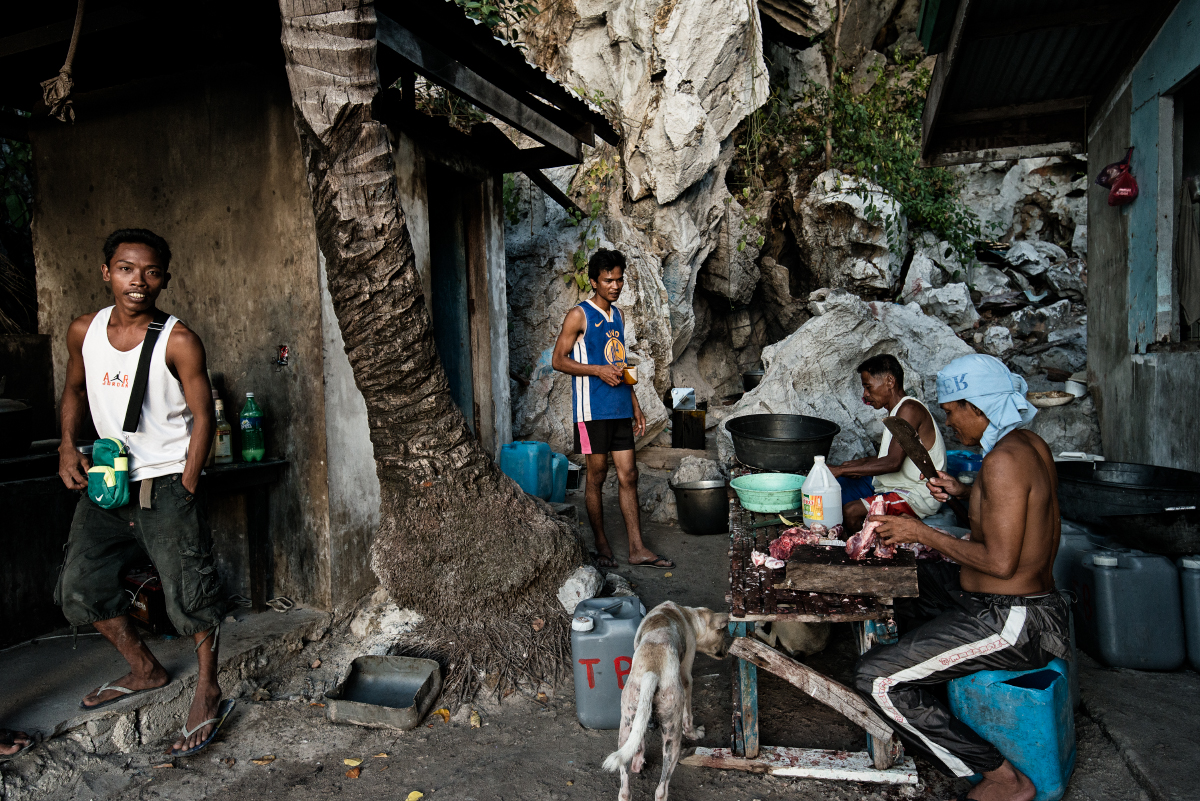 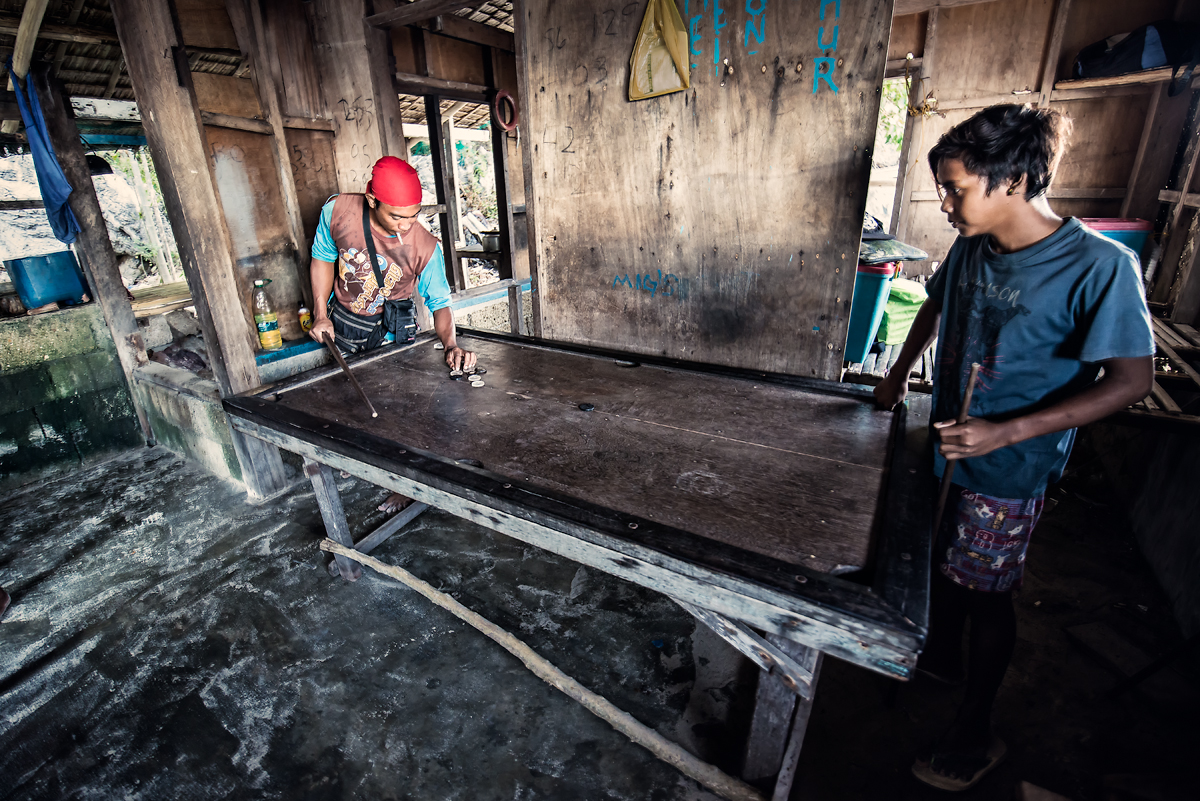 Busyadores have been climbing these karsts for centuries and regulations have been introduced in Taytay as early as 1927 to guarantee the conservation of the birds. The collection period begins in December with the “limpiada”, literally the cleaning of the cave wall from the old nests in preparation of the new season. The first harvest follows in January and it is completed over seven collection periods with 15 days interval. After the last harvest, busyadores observe a long resting period to allow swiftlets, known by the locals as balinsasayaw, to repeatedly lay eggs until fledging. 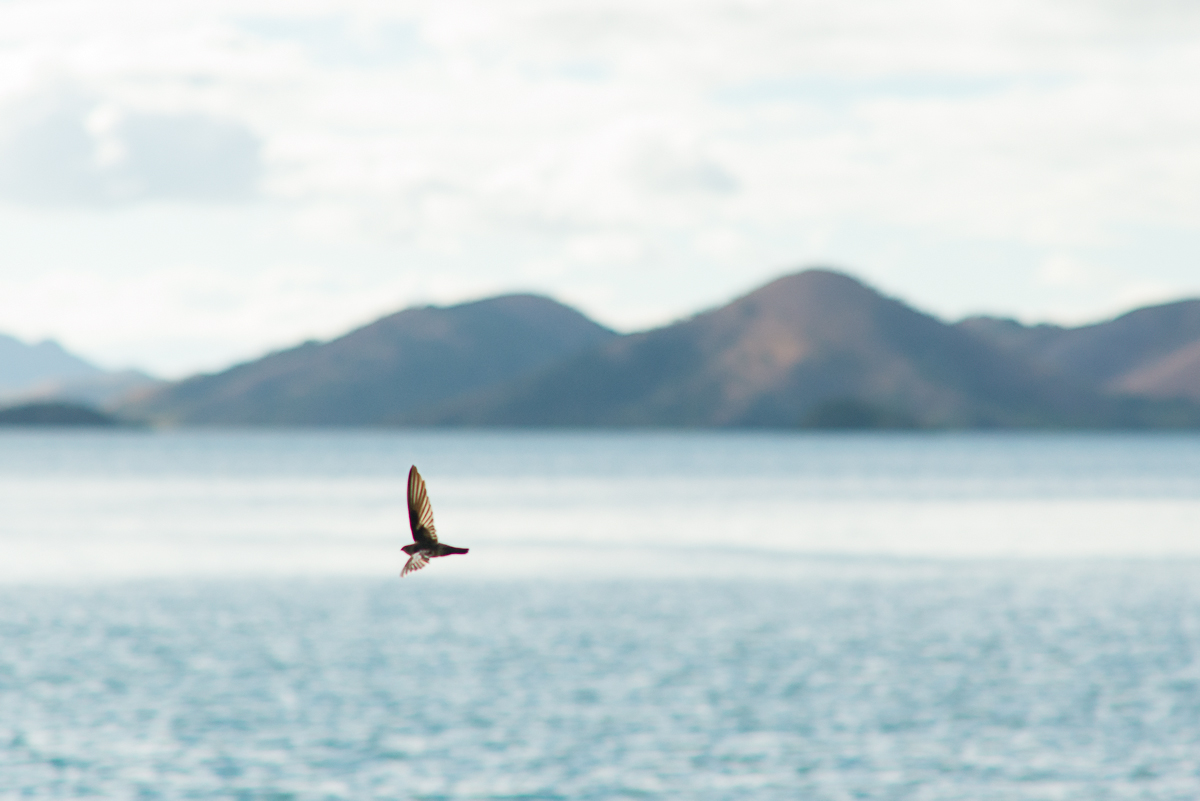 We were welcomed by the island caretaker. “Please, join us for dinner tonight!”, he said while handling a large pot on the backyard fire. Men were starting to assemble around the fireplace with the few exceptions of those on duty for the night. 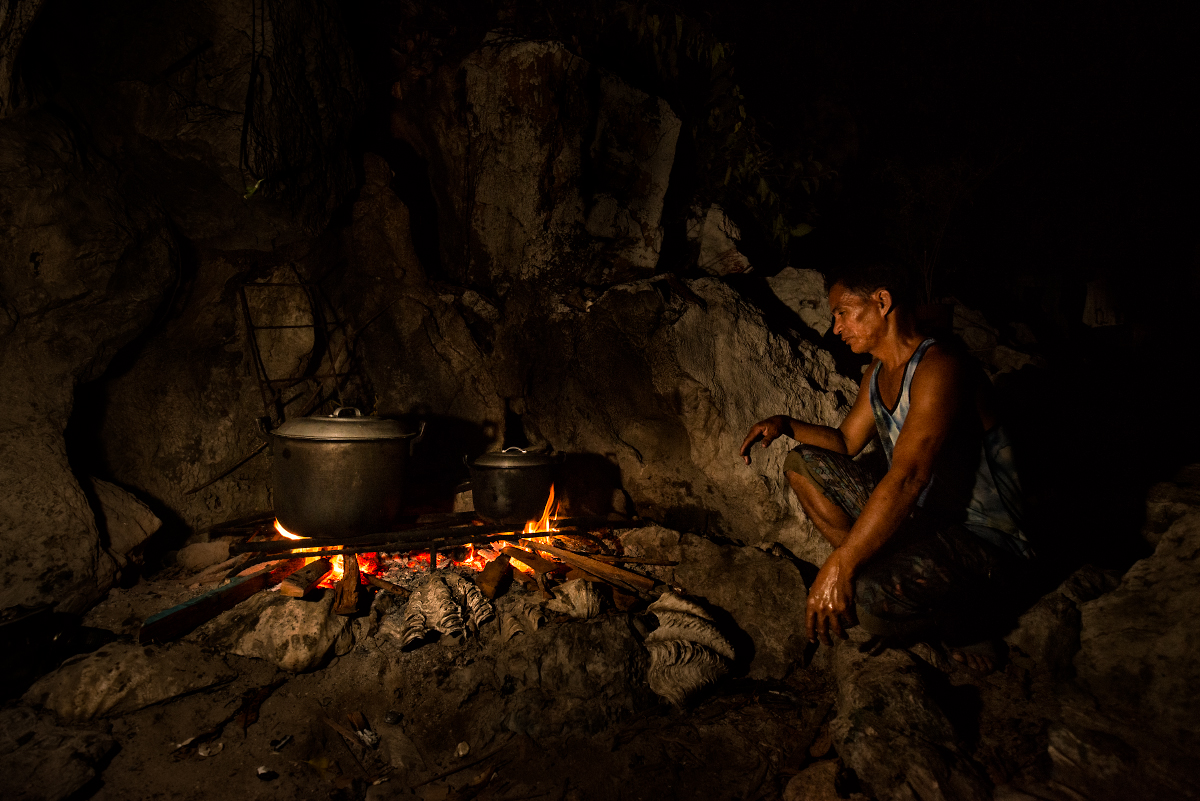 At more than $2500/Kg, bird’s nests are among the most expensive food consumed by humans, feeding a growing market worth $5 billion a year. It comes as no surprise that nest poaching is a major problem, posing a major threat to not only the workers but also to the swiftlets population. Thieves are sometimes spotted in the middle of the night; they leave their boats and swim to the shore for a few hundred meters before climbing in darkness on the top of the island. They will spend a few days in solitude, trying to steal as many nests as possible before getting back to their comrades. To prevent poaching, armed guards patrol the island for the length of the harvesting season, on the look out for unwanted visitors. “What if they are caught?”, I asked Omi’s brother who had just joined with another boat. “We bring them to the authorities, but chances are that they are shot to death and let sink in the sea”. 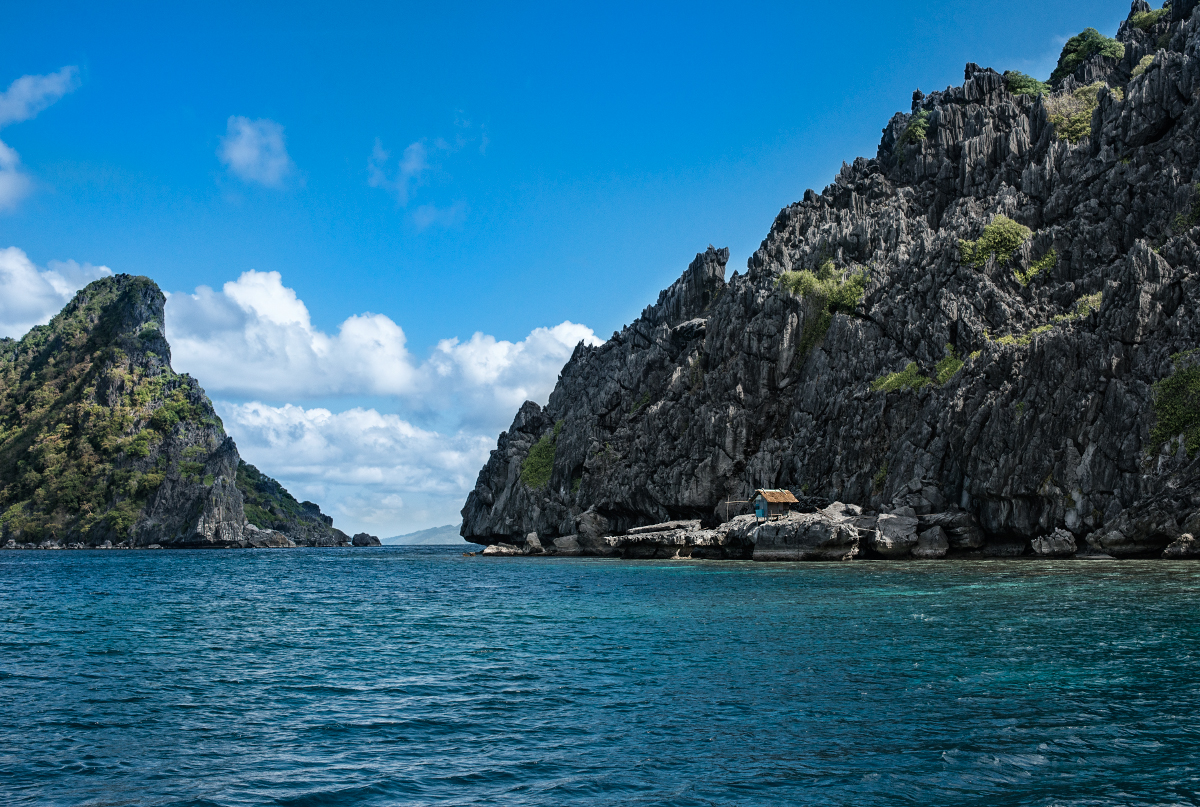 The next morning busyadores set out for the neighboring Pequeno Island, carrying flashlights, ropes and bamboo poles. Some of the men were holding a handmade stick ending with a bent fork, to remove nests from the most unapproachable walls. 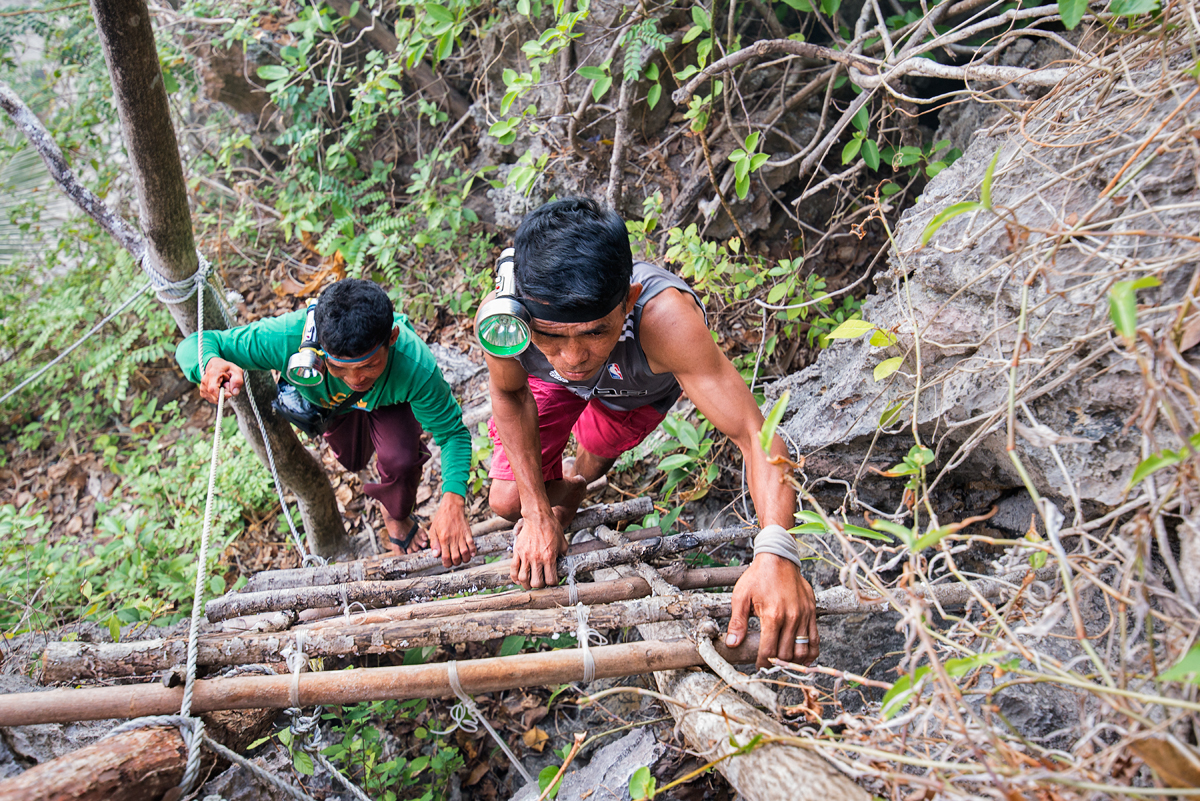 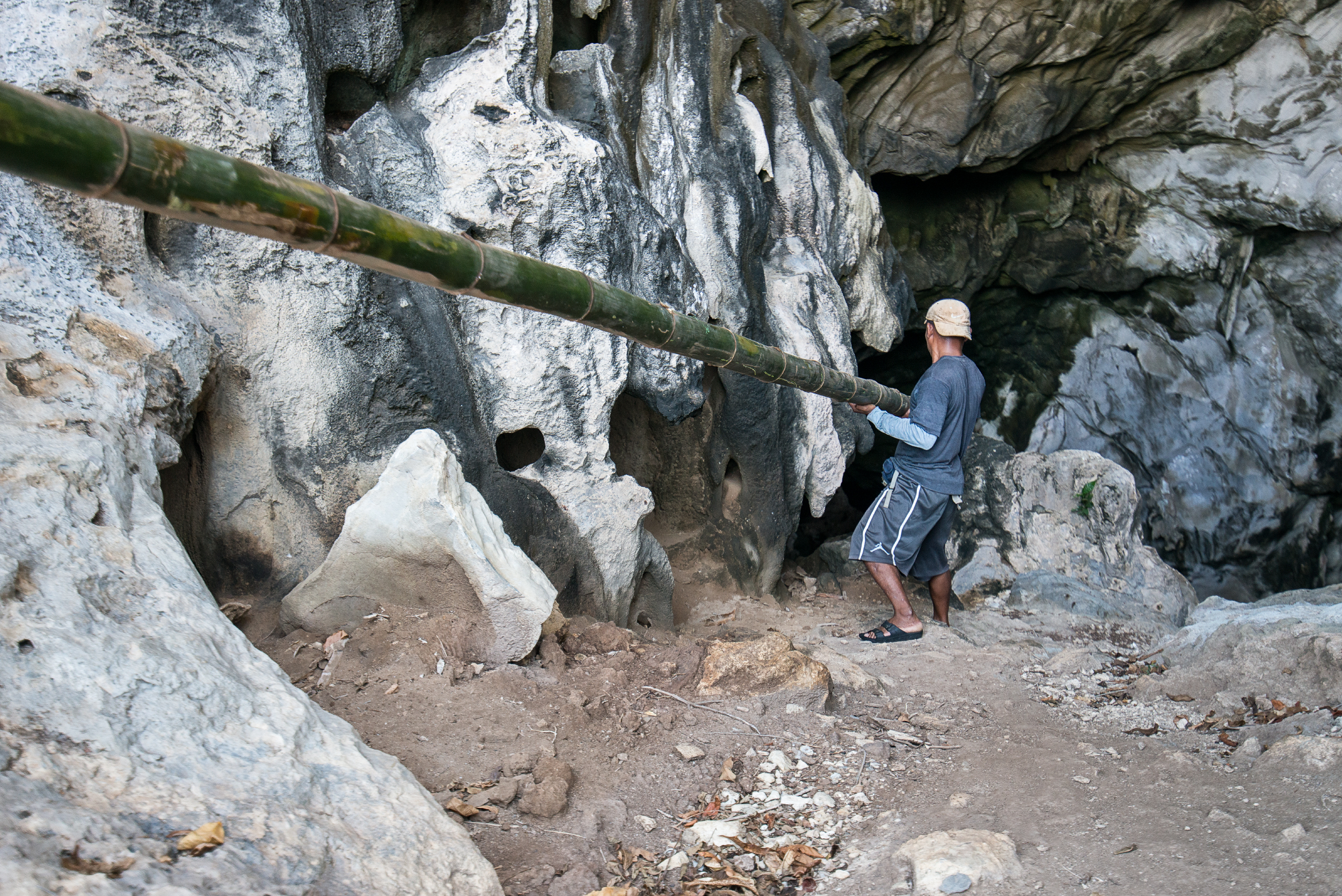 Arthur, 24 years-old, was among the youngest and the only one climbing without poles. Eduardo, 51 years-old from Pangatalan, was the oldest. “I started climbing 45 years ago at the age of six; there was a narrow cave where only small children could go”, he recalls.

“Most of us prefer climbing without ropes, but rocks can be sharp and slippery, and the risk of an accident is high. I remember a few men falling; it’s a dangerous business”. 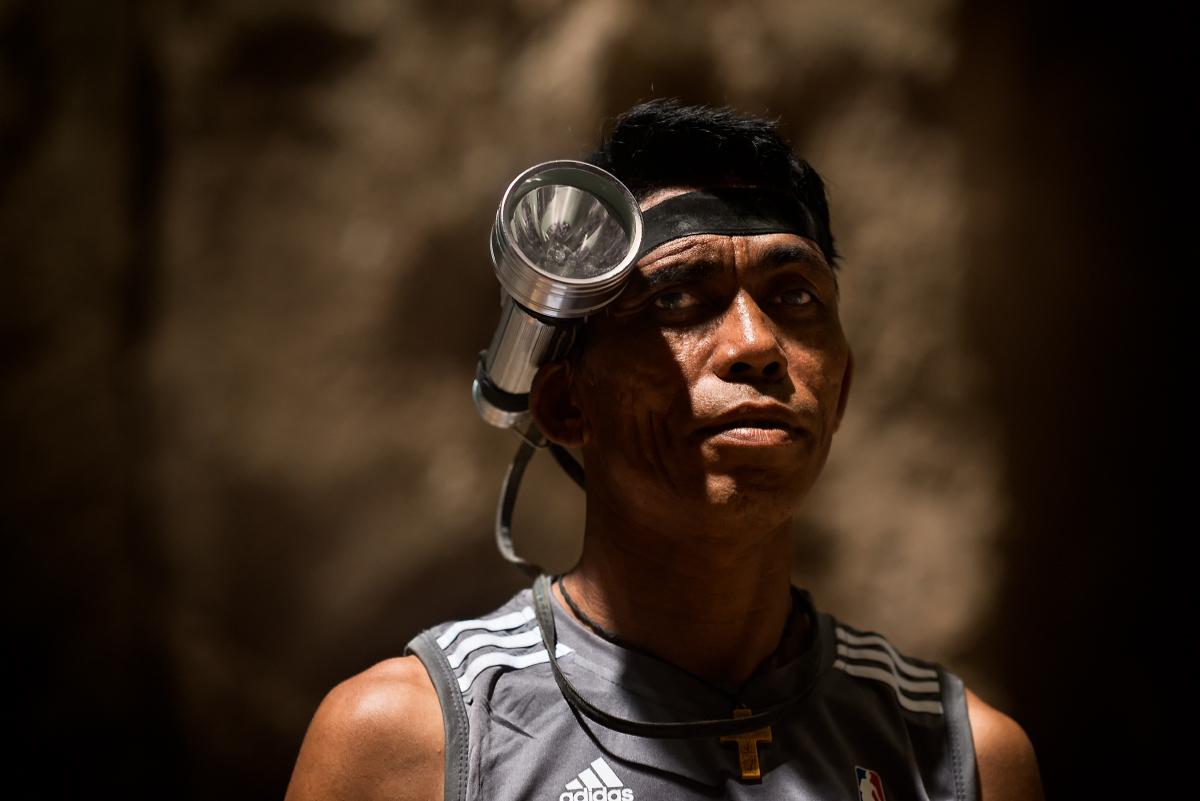 Guano is among the most accessible caves on the island and one of the few where light found a way through. It can be entered through a narrow passage, which quickly opens up into a 100m high chamber, making it one of the few places where it is actually possible to witness the whole process. 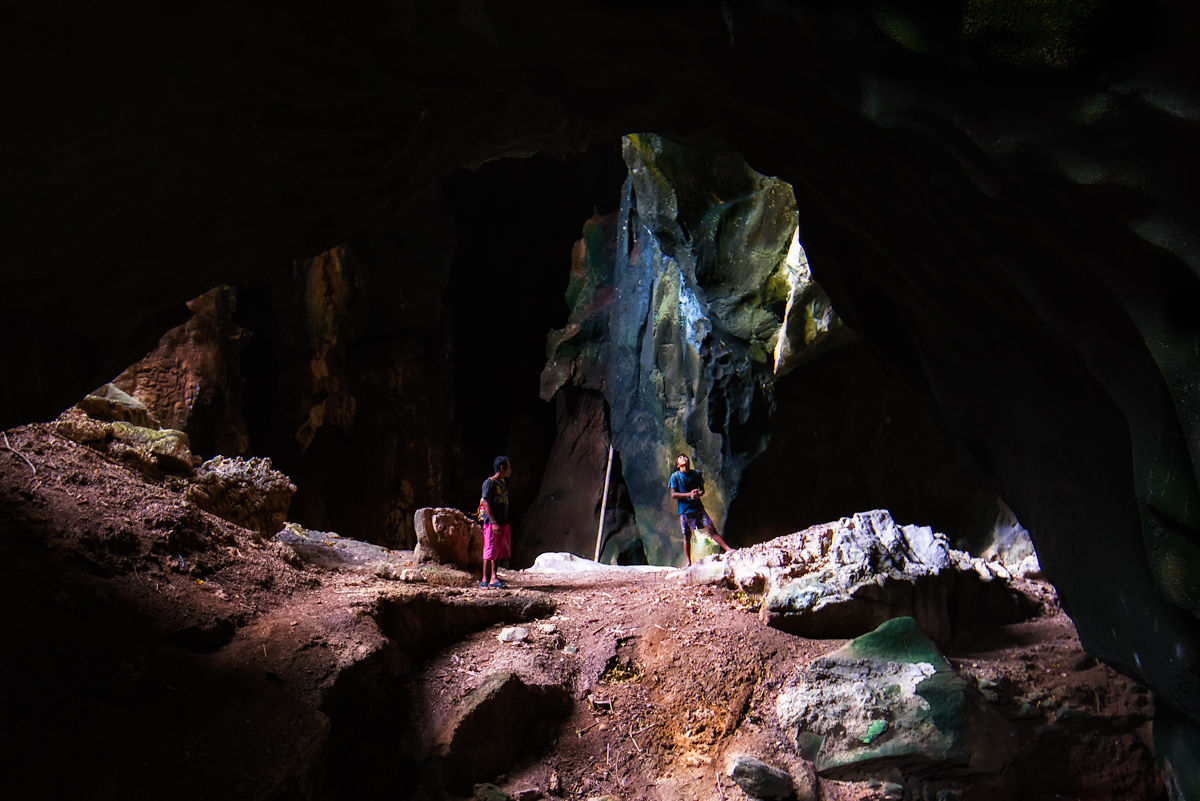 Slowly and steady, busyadores made their way through a path walked by their ancestors for countless generations. It took them about 1 hour to set up ropes and bamboo ladders and another hour to harvest the nests. 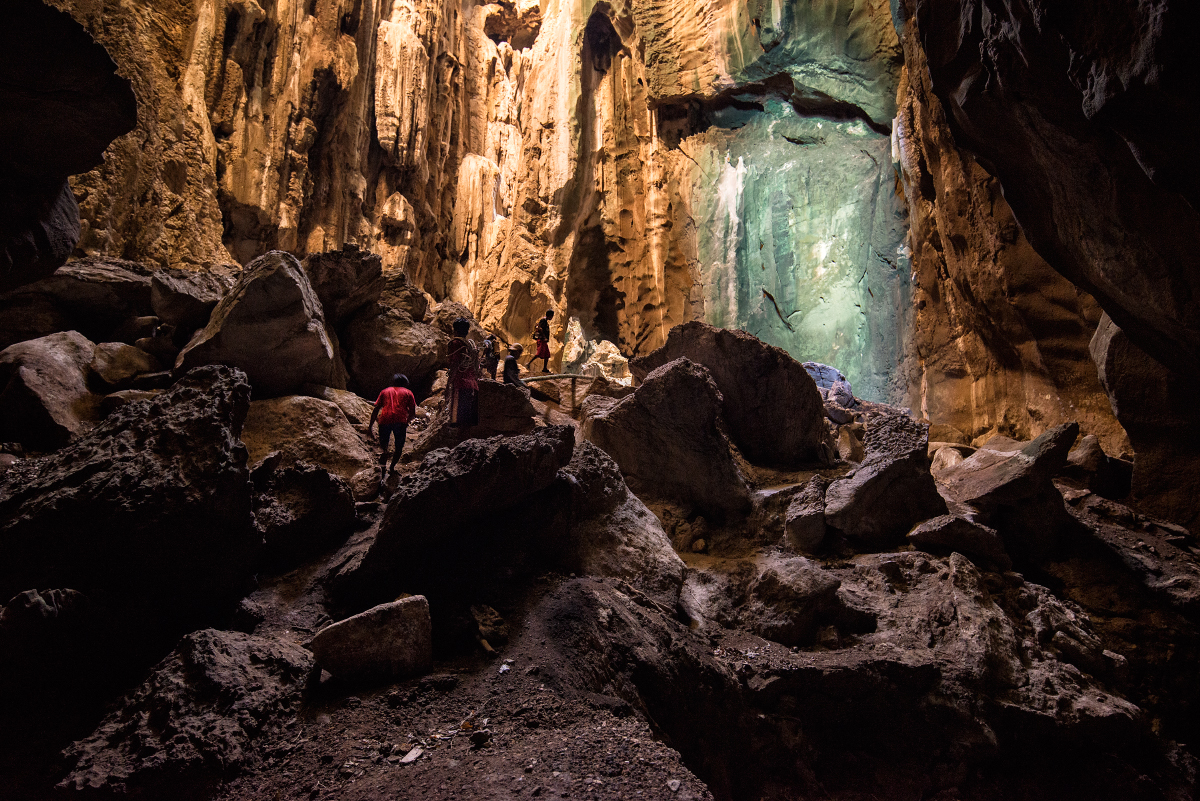 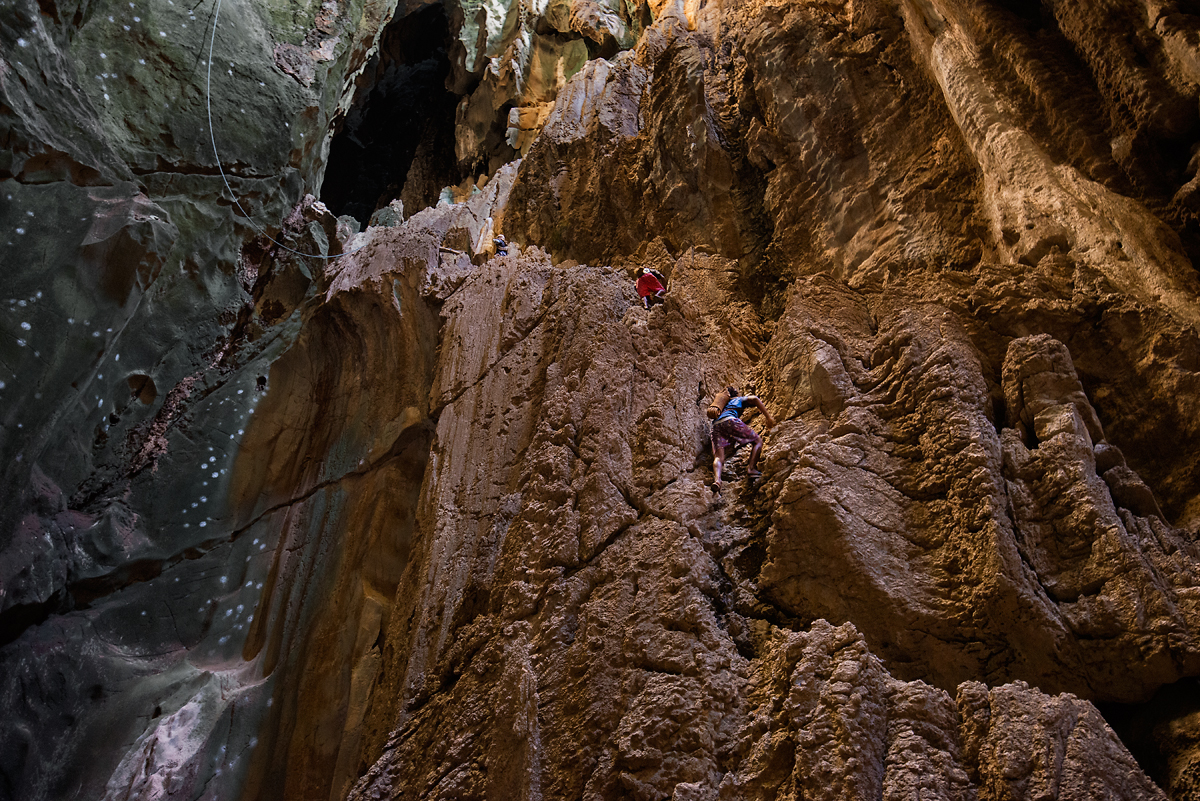 I was holding my breath when Alfred forced his way through a crack in the cliff face, fighting with darkness and the constant risk of falling to his death for a bunch of nests. 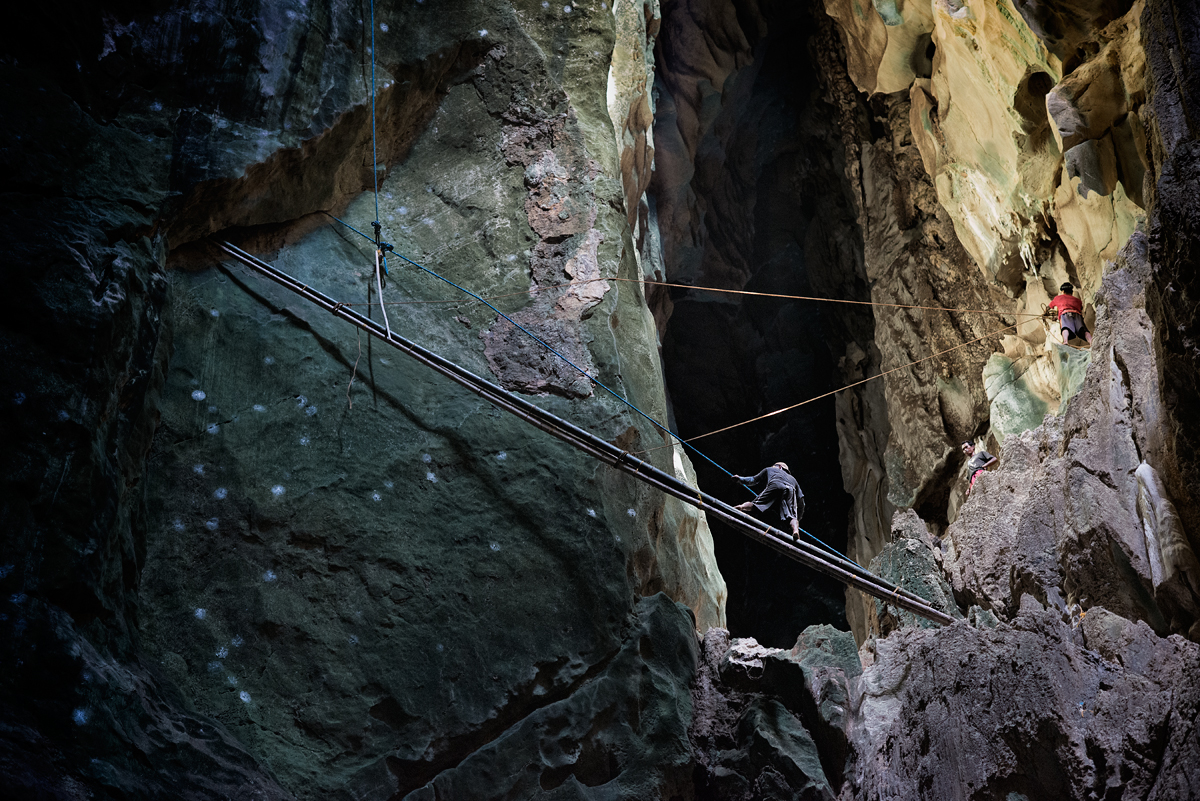 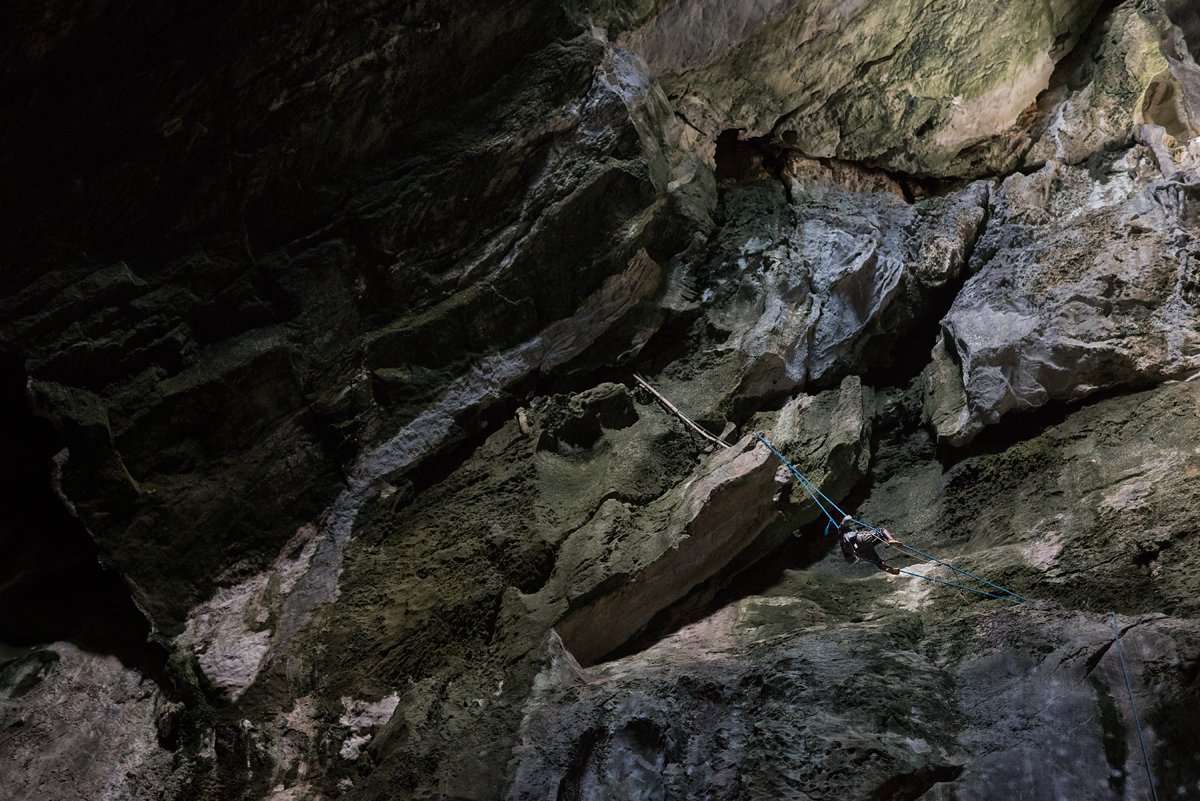 It took them approximately two days to cover the craggy skyscrapers that characterize the entire concession. Busyadores knew the pathway and quickly ventured from one dark cave to the other through an established routine, bringing back their gatherings to the wooden hut. Michael, 27 years old from Meytegued island and among the most skilled climbers, was particularly satisfied.

“I collected more than 100 nests; at Php 80/gram, this is worth three times the salary I get on a gasoline boat during the resting season”

Back to the hut, Michael and the other workers would then fine-tune their gatherings by removing feathers and dirt with a blade and the most precise instrument of their hands. 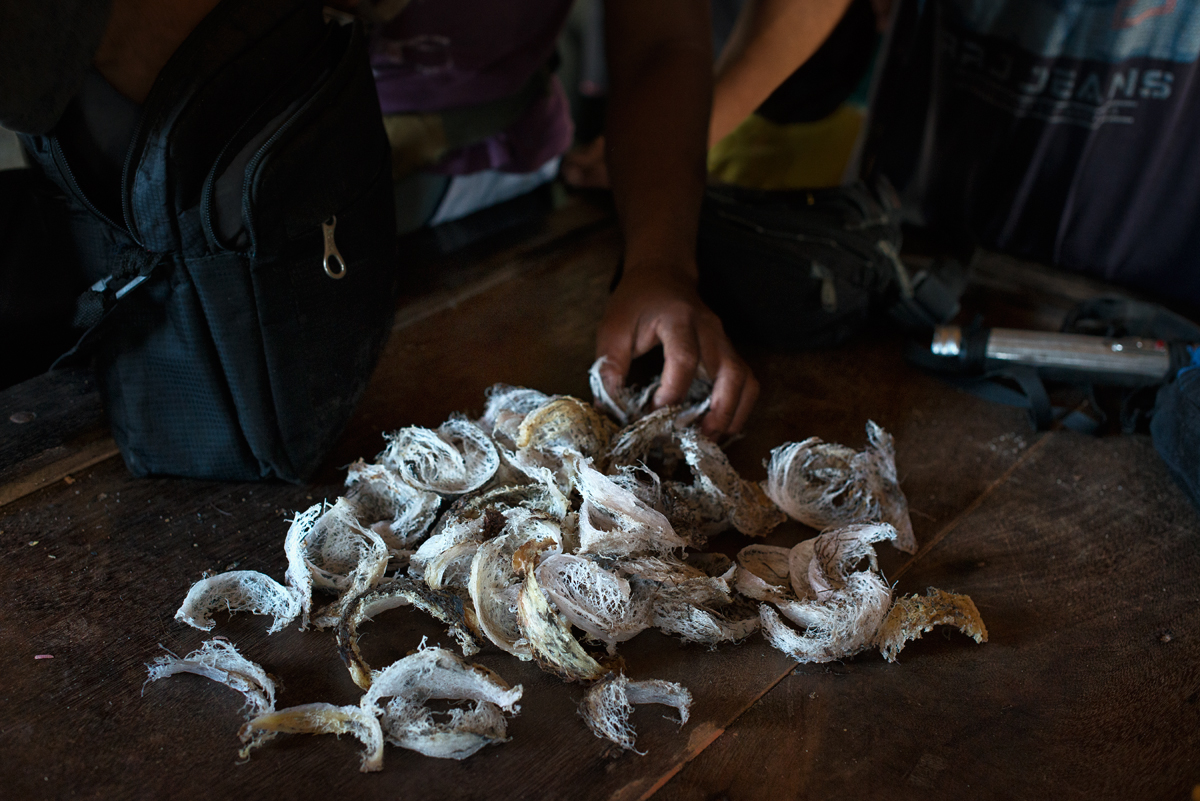 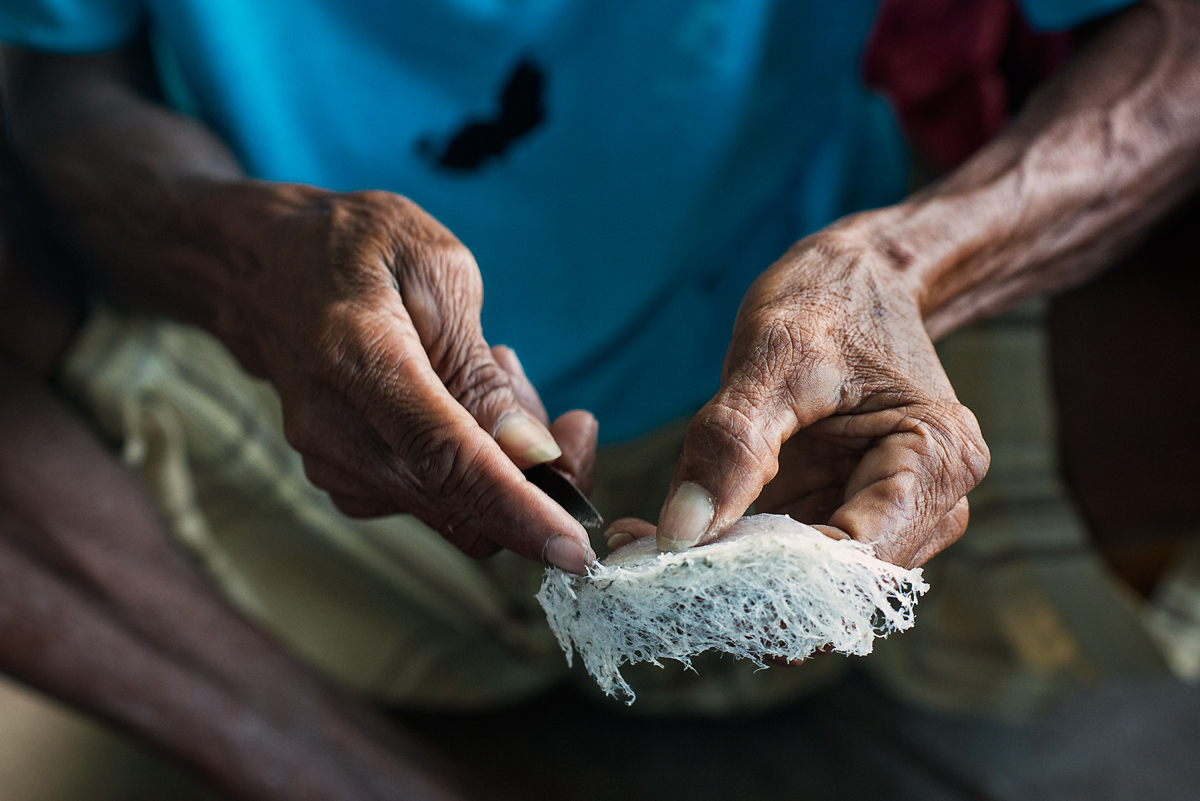 Omi had arrived the same morning to sort through the nests and pay the seasonal worker. The finest grade of bird’s nest (“A” grade) would fetch up to Php 170/gram, while the lower quality “B” and “C” grade would sell for Php 130/gram and Php 70/gram, respectively. For one of the most expensive foods on earth, even the debris did not go waste; they would be soaked in water, cleaned from impurities and sold for Php 10/gram. “I am taking the nests to Taytay, traders are waiting for me there. Most of the nests will be shipped to Manila and then to other Asian markets”, he revealed. 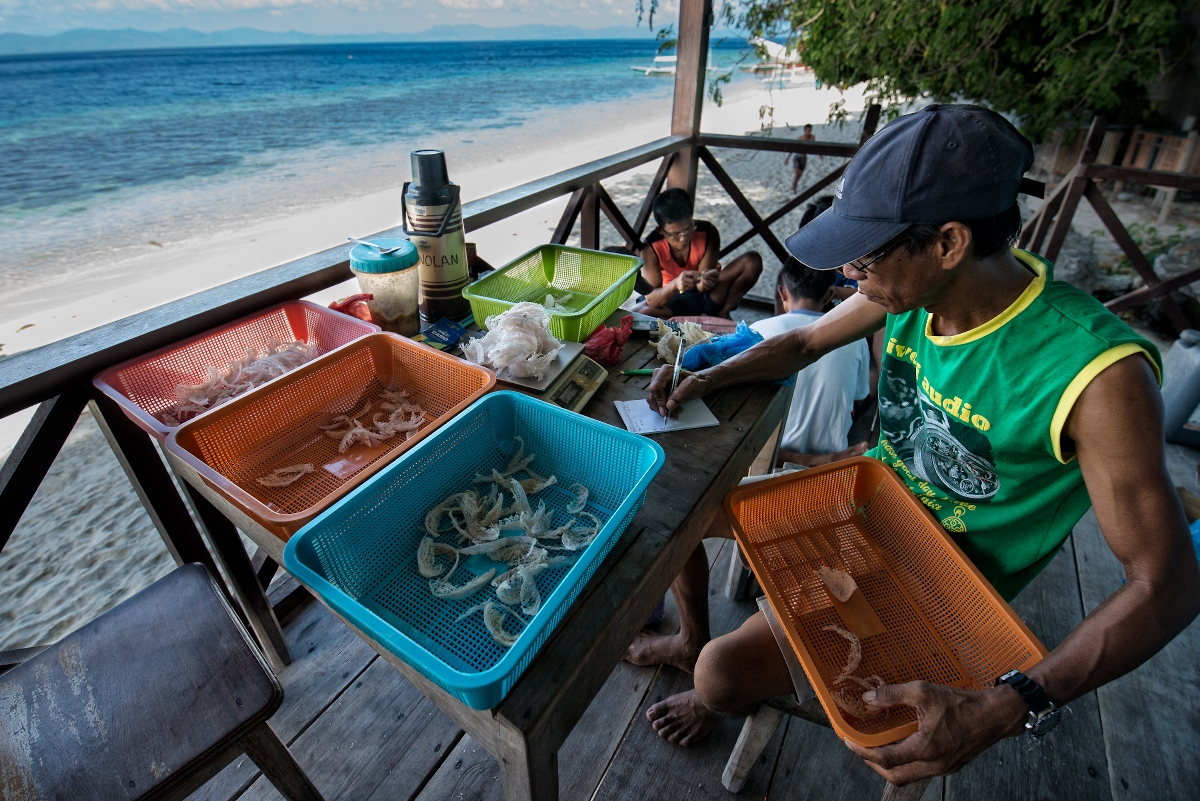 While demand for this delicacy is soaring, nest gatherers are faced with some major challenges. Prices are plummeting, owing to artificial nest farming in windowless building that emulate cave environments, putting the income of traditional gatherers at risk. Sustainability concerns have also been raised and the swiftlets population is suspected to be in decline because of poaching and over harvesting. In this regard, the Pabellon concession is a virtuous example of sustainability, as the strict regulations put in place (nests are never collected if eggs are present and harvesting times are strictly followed) give the birds enough time to reproduce. Given the mutual relationship between the birds and the local communities dependent on them, a bright future might still lie ahead.

Men where ready to return to their families. When I began my journey back to Taytay, night was approaching and I had time to reflect on this captivating experience. Meeting these people brought concepts such as courage, strength, and determination on a totally new dimension.